Skip to main content
To provide you with the best experience, Barking Owl Retreat - Farm Stay - Exclusive to Adults uses its own and third-party cookies on its website for technical, analytical and marketing purposes. By continuing to browse our site, you are agreeing to our use of cookies. Please consult our Cookie Notice for more information. 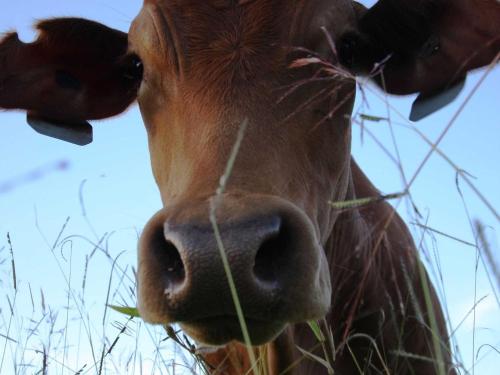 Atherton Tablelands Farm stay accommodation Barking Owl Retreat is a 41 acre cattle fattening property privately located at the end of a country road in Kairi on the Cairns Highlands. Our Farmstay is home to a small heard of steers, farm dogs 'Bear' the Red Australian Cattle Dog and his son 'Diesel' the Blue Australian Cattle dog. A family of Call ducks (miniature ducks) and a flock of guinea fowls. From time to time we have baby animals as well. (Guinea Fowl Keets, Ducklings, and in the past Puppies) We also stock different cattle from Brahmans, Droughtmasters, and Brangus steers. At times the animals may change and you can keep up to date on our Facebook page. You can see the cows up close when they are fed molasses in their yards or you may be lucky enough to have them in the paddock right outside your cottage. Past guests said it is so quiet and peaceful here on our property that you can actually hear the cows eating grass! 'Diesel' and 'Bear' the Farm cattle dogs sometimes chaperone our guests when they walk down to go fishing in the retreat's private dam. The Call Ducks also ensure to greet all of the guests with their friendly quacks as they swim gracefully around the pond by the office among the wild Wood ducks and Mallards. And the guinea fowls dart around eating bugs in the gardens and paddocks all day. You can also see Kangaroos playing in the paddocks in the dry season, and Rabbits and Owl's on the road into Barking Owl Retreat at night in winter. 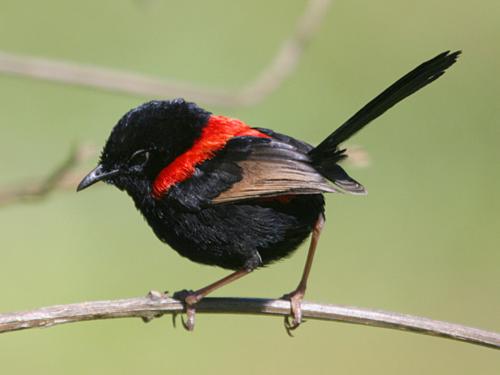 The Atherton Tablelands is a renowned birding hot spot or you could say a Birdwatcher's Paradise! Enjoy Atherton Tablelands Birdwatching at Barking Owl Retreat. Wake to the sound of birds and relax to their songs all day long. Native Birds are attracted to the blue gum trees and bush land in the gully alongside the cottages, and as well as our native gardens. Myself and many guests have caught some wonderful birds on camera here on the property and some are shown in the slideshow above. The Eastern Yellow Robin on the barbed wire fence was taken from the Dingo's Lair deck, and are quite often seen around the property. Blue cheeked Rosella's visit from time to time. The Red Backed Fairy Wren, such a beautiful dainty little bird, can be seen here in abundance at different times of the year. And although the male has a magnificent coloured coat the female is also very cute! We also have the gorgeous Scarlett Honeyeater and parents and baby can be seen in a video and more pics on our Facebook page. We actually helped raise the Tawny frog Mouth chick shown above in conjunction with mum and dad! The Green Backed Honey eater is commonly found in the gardens around the Retreat along with the White-cheeked Honeyeater. Many water birds, including a visit from Pelicans, drink at the house duck pond and the private dam. More regulars are the Red Cheeked Finch, Double Barred Finch, Cockatoos, Lorikeets, and many Birds of Prey. The tiniest but most spectacular bird here is the Mistletoe bird! We also get Brolgas, The Sarus Crane, and Bustards feed in the paddocks at the end of Hough Road at certain times of the year. There are too many bird species in our habitat to mention and for bird lovers we also highly recommend a visit to Hastie's Swamp in Atherton. 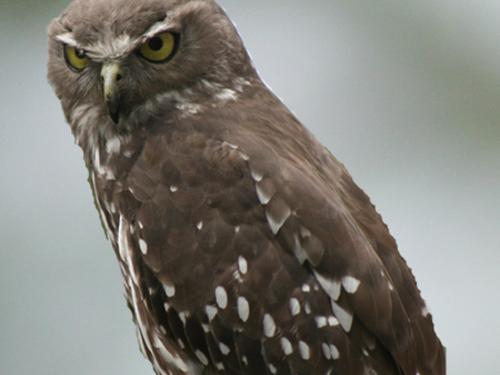 Barking Owl Retreat on the Atherton Tablelands is home to Bird of Prey the Barking Owl. Otherwise know as Ninox Conniven Speninsularis, the Sub-species found in Far North Queensland, Australia. Barking Owl Retreat was aptly named due to the abundance of Barking Owl's that frequent our property and many guests do get to experience hearing their soft wook-wook call. Their call is similar to a yapping pup.  Watch our Facebook page video here. Just on dark the Owls generally call out to each other and can be heard in the native bush land alongside each of the cottages most of the year. The female Barking Owl also has a different call when breeding, which resembles a screaming woman, or as I would describe, a curlew with a sore throat. The females mating scream is generally only heard once or twice a year. Barking Owls generally breed in August which is usually the coldest month, but in the past few years they have bred in June and July because of shorter warmer winters. The Owl's Hollow has had a pair breeding in the large Blue Gum tree outside the cottage several times. Hence the name. We have also obtained some man made nesting boxes to entice more Barking Owls to breed here. One is positioned in a tree out from The Dingo's Lair cottage, and another is located near our fruit orchard. In the 2011 winter we discovered a breeding pair hanging around the house. After taking many photos of them I finally let them get back to their hunting. The Barking Owl is a medium sized owl that can grow up to 40cm in size. Their alluring bright yellow eyes stare you right in the face, and their white prominent eyebrows give them a stern look. They have an unusual greyish brown coat with white spotted wings and back, and vertical streaked chests. Their tail feathers are barred and they have light yellow feet with long claws for catching their prey. They hunt early in the evening and late in the morning. Many small birds, mice, insects, bats, small possums, and even rabbits are on their menu list. During the winter months they are often seen at night sitting on fence and sign posts, or on the road (Hough) into Barking Owl Retreat hunting their prey. Barking Owls like to retreat around water and they are often heard around the property dam early in the evening. Barking Owls are found in many parts of Australia but are more prominent in Northern Australia and are also found in New Guinea. The Barking Owls found in other states are a different subspecies and are an endangered.
Contact us or Enquire Here